Despite great potential and benefits, rooftop solar PV in Vietnam has not yet been developed. How to boost this power source?
Why must develop roof pressure DMT?

According to Tran Dinh Nhan – General Director of EVN, in 2017, after the Prime Minister issued Decision No. 11 on the mechanism to encourage solar power development, large capacity projects have developed strongly. However, investors focused too much on areas with high radiation intensity and easy access to premises (South Central provinces). This creates great pressure on the transmission grid; Some factories will not generate their full capacity, affecting investment efficiency.
Facing this situation, rooftop solar power is a particularly effective solution contributing to energy security, because the advantage of this power source is the direct connection to the existing low-voltage grid of EVN. However, up to now, the country has only 1,800 customers participating with an installed capacity of about 30 MWp, the amount of electricity generated on the grid reaches nearly 4 million kWh – too small compared to the potential.
At the recent conference “Promoting rooftop solar power development in Vietnam”, Ms. Wei Thi Khanh – Director of Green Development Center (GreenID) said that Vietnam has over 11 million households. family. Efficient exploitation of this resource will contribute to reducing a huge pressure on the electricity system and will not cause a local overload of the transmission grid.
According to energy experts, rooftop solar PV can also be deployed in the form of sharing: EVN shares power grids for investors; households share roofs; investors can participate by investing capital, equipment … When installing rooftop solar power, families not only reduce electricity costs but also contribute to reducing the pressure of power sources for EVN. 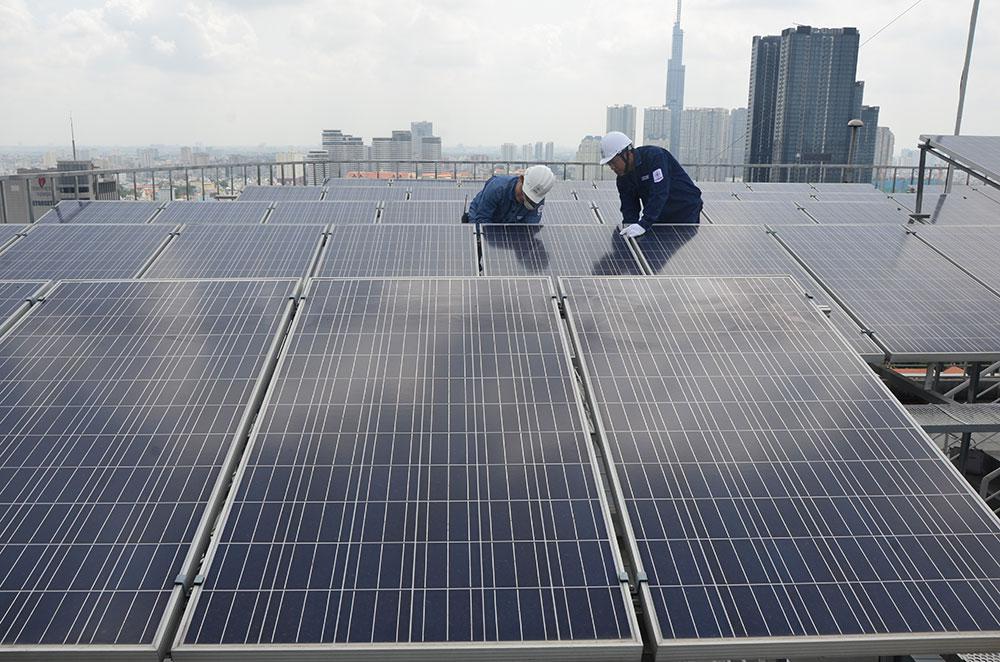 How to promote it?
The development of rooftop solar power in Vietnam still faces many difficulties, as there is no official guidance on how to pay the customers’ electricity bills; Investment costs are still high; customers are still afraid due to lack of information on product quality, construction units, installation, operation mode …
According to Ms. Wei Thi Khanh, in the coming time, the authorities need to promote communication, so that each household understands the benefits as well as investment capital, rooftop solar power connection technology; At the same time, the State should have support mechanisms and policies such as tax exemption while the system has not yet been reimbursed; there are credit support programs …
In addition, it is necessary to have mechanisms for donors, banks, investors, producers, international and domestic organizations to participate deeply and provide attractive solutions and services. customers invest and use rooftop solar power …
In particular, the Ministry of Industry and Trade should soon issue a circular amending Circular 16/2017, so that EVN and the power units can sign contracts and pay electricity generation to customers; at the same time, building technical standards of rooftop solar power to ensure quality, safety and efficiency for customers as well as the grid system.
On the side of EVN, Mr. Tran Dinh Nhan said that the Group is committed to maximizing all requirements of the people and businesses such as: Simplifying the procedures for connecting; timely payment of electricity charges after the guidance of ministries / branches is issued; free installation of two-way meters … EVN will also continue to be a pioneer in propaganda and deployment of rooftop solar power installation so that people and businesses can see the benefits and effectiveness from the models. Specifically.