However, according to experts, the massive development of concentrated solar power creates the risk of overloading the grid and unsafe operation of the electricity system. Trillions of dong have been raised to enhance and upgrade transmission lines and substations (including the 500 kV ultra-high voltage grid) to absorb the approved capacity.
Currently, attic solar power is highly appreciated by many experts because it does not waste land area, which helps to enhance effective anti-heat for buildings. This system is installed on a small scale on residential roofs, commercial building roofs, factory roofs, factories … with a scale of several kW to MW.
Common solar panels with a capacity of about 290-350Wp are designed in a panel area of ​​about 1.9 m2. If the roof area is about 20 m2, it is possible to install 10 panels, the maximum power output is about 3 kWp, which is enough for common household electrical appliances.
Thanks to its small scale, scattered installation, rooftop solar power is usually connected to the existing low and medium voltage grids, no need to invest in additional transmission grid system. This system is also installed in many rooftops in cities and industrial zones, so it reduces the overload of transmission grids from traditional power sources, often located far from densely populated centers. 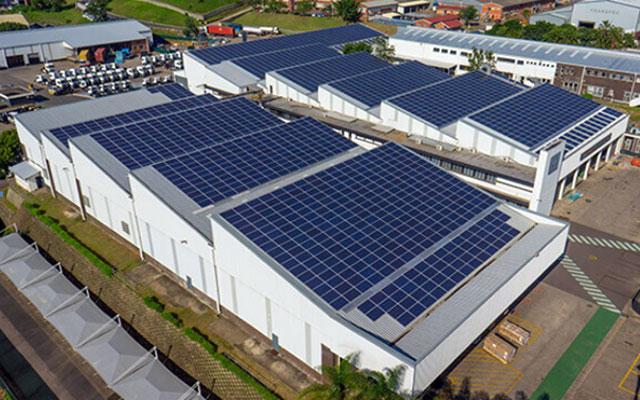 With many advantages of the rooftop solar power system, Electricity of Vietnam (EVN) has implemented many activities to encourage the use of this system, creating conditions for businesses and private investors to invest. development, installation on the roof of headquarters buildings, operating buildings, transformer stations …
By the end of 2018, more than 3.2 MW of rooftop solar PV capacity was installed at constructions belonging to EVN’s subsidiaries, of which 52 kWp at Hanoi Electricity Corporation. , Central Power Corporation accounts for 352 kWp, Southern Power Corporation is 1,985 kWp. Nationwide it is estimated that 1,800 customers have installed this system with a total capacity of 30.12 MW.
However, EVN representative said that developing rooftop solar power is still facing many difficulties due to high installation cost, about VND 20-23 million per kWp of capacity. Therefore, the price of electricity produced is not competitive. According to meteorological surveys, the Northern and Northern Central regions have less sunshine hours than the Southern Central and Central Highlands regions, the investment efficiency is still low.
In the seminar “Promoting rooftop solar power development in Vietnam” on February 27, EVN leaders also made a number of recommendations such as continuing propaganda about the benefits of solar power development. roofing, encourage organizations to install systems or put in place mechanisms to support households.
“The government should have a mechanism for investors (3rd parties) to invest in rooftop solar PV; building sponsors, banks, international and domestic organizations are deeply involved. Meanwhile, manufacturers, suppliers, installers coordinate with EVN and power units to propagate, advertise and provide solutions and services to support this market expansion. ” , proposed business representative.